This story was told by Matthew Chayes, Joan Gralla, Bart Jones and Joie Tyrrell. It was written by Jones.

The number of newly confirmed cases in Nassau and Suffolk counties rose to over 100 in tests that were completed on Thursday, according to state data released on Friday.

The news came as the United States exceeded 8 million confirmed cases of COVID-19 on Friday, the most common worldwide, according to Johns Hopkins University, which is tracking cases worldwide. The US leads the world in COVID-19 deaths with more than 218,000 deaths. That’s more than a fifth of the world’s total.

New York’s nationwide average of positivity was 1.25% for tests completed Thursday and 4.8% for hotspots located in Brooklyn along with counties of Queens, Orange and Rockland.

States / regions in red are listed on the New York Travel Advisory List starting October 13, 2020. Guam and Puerto Rico, not shown, are also on the list.

The national average excluding the hot spots was 1.14%. Cuomo claims their inclusion skews results as the state has tested more in areas with high infection, which has led to over-testing at the hot spots.

Most of the hot spots are in neighborhoods with a large ultra-Orthodox Jewish population. Cuomo ordered last week that all schools and non-essential businesses in the “red zones”, where cases are concentrated, be closed, and restricted places of worship to no more than 10 people at a time.

“The numbers in New York remain stable despite the few clusters we are currently focusing on. We are targeting these clusters through our targeted approach to ensure they don’t spread to the community,” said Cuomo.

He added, “As we go through fall and winter and cases continue to increase across the country, it will take the work of all New Yorkers to keep our progress going. We cannot and will not risk going backwards to where we are we were.” in the spring. Our progress is thanks to the New Yorkers, who took the opportunity and come together like no other community. But we have to move on – we all have to wash our hands, wear our masks, and stay socially aloof. “

New York Mayor Bill de Blasio said this week he would decide until Sunday whether to extend the two-week restrictions in the red zones, but Cuomo said it was a state decision.

Ten people died across the country on Thursday from causes related to coronavirus. About 918 people with the virus were hospitalized, 21 more than the day before.

The number of new cases confirmed in tests completed Thursday were 105 in Nassau County, 104 in Suffolk County and 660 in New York City.

Laura Curran, district manager, said on the new daily cases of more than 100 in Nassau, “We have seen an increase in COVID-19-related hospitalizations over the past week with 64 patients in Nassau’s 11 hospitals to date. Eighteen of these patients are in intensive care and 10 are on ventilators. “

She added, “I am also very sad that three residents of Nassau County have died from the virus in the last 24 hours – a sobering reminder of how serious this virus can be. The county is working closely with the schools affected Universities and communities to stop the spread and improve access to rapid tests. “ 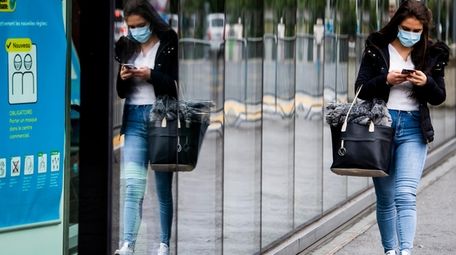 A woman with a protective mask walks past a shopping center in Freiburg on Friday. In Europe, cases have increased due to increased public exhaustion from coronavirus measures, while in the US there have been 8 million confirmed cases. Photo credit: AP / Jean-Christophe Bott

Based on the numbers released on Friday, de Blasio said the infection rate of people tested for coronavirus in the city is 1.02% and the moving average of 1.56% over seven days. 77 people have been hospitalized for COVID-19, he said.

De Blasio provided the numbers during his weekly Ask the Mayor segment on WNYC radio.

In the past three weeks, there have been 3,229 test results from students, teachers and public school staff in “yellow zones,” four of which were positive, de Blasio said.

“Only four cases that were positive out of 3,229. Here, too, the history of the schools is still very good,” he said.

There are weekly tests in every school in the “yellow zones” and monthly tests in the rest of the city’s schools, he said.

Schools in Sayville and Huntington are closed

Sayville Middle School closed Friday after a person in the school tested positive for the coronavirus, school principal John E. Stimmel said in a notice posted on the school website.

The closure allows officials to track who has been in contact with the person. Stimmel did not say whether the person was an employee or a student.

Finley Middle School in the Huntington School District was closed to students on Friday after a student tested positive for COVID-19. This emerges from a letter from school officials posted on the district’s website. The children at school switched to distance learning. The district is working with the Suffolk County Department of Health on contact tracing.

“While the student’s symptoms first appeared on a weekend day, contract tracking must go back 48 hours from that day. In consultation with the SCDHS, we will guide students and staff who have been in close or immediate contact with the positive case of the student Stay at home and take up distance learning from the school district or SCDHS until further notice, “Superintendent James Polansky said in the note.

At Riverhead High School, a student is quarantined after testing positive for the coronavirus. Suffolk County’s Department of Health will take care of tracing contacts and “issue quarantine orders if necessary,” said Christine Tona, superintendent of the Interim Schools, in a letter.

Look back for updates on this developing story. Sign up to receive COVID-19 text notifications.

Bart Jones reports on Religion on Newsday, where he has been working since 2000, and is a former foreign correspondent for The Associated Press in Venezuela.